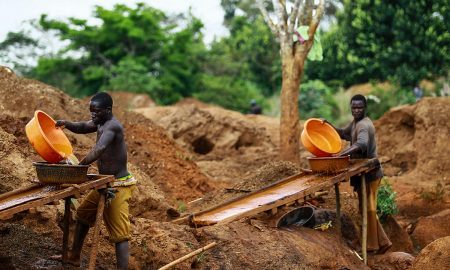 Stringent requirements and high licence fees have for many years alienated artisanal miners from the mainstream economy but this is gradually changing. A plethora of licences ranging from the Environmental Impact Assessment reports to prospecting fees meant that most of the artisanal miners played cat and mouse with authorities as they had no capacity to meet the requirements.However, a new policy announced by the Reserve Bank of Zimbabwe governor Dr John Mangudya recently looks set to put a stop to the cat and mouse game between Government agencies associated with minerals trade.

According to the new policy, the central bank’s gold buying unit Fidelity Printers and Refinery is now buying gold from artisanal miners on a “no questions asked” basis through mobile buying centres to be deployed across the country; the primary gold buyer to issue permits to buyers to cover mining areas that have high activity of artisanal miners; and that FPR, shall in the process, gradually develop a database and account for production by artisanal miners.

But while small-scale miners and artisanal miners agreed that the “no questions asked” policy is a welcome development they highlighted some key issues that they believe are needed to support the policy.

Some of the key issues they mentioned include monitoring mechanisms to ensure gold does not end up in wrong hands, pricing structures and enhancing environmental laws and their implementation matrix.

They said FPR’s pricing structure plays an important role in ensuring that the policy achieves the intended purpose.

“In a way, yes this policy should see a marginal increase in the gold inflow to Fidelity. There are those people who are naturally law abiding and would find this as a way to just do things lawfully,” said Mr Davison Svuure.

Mr Svuure, a small-scale miner in Guruve who works closely with artisanal miners in his capacity as Gold Miners Association head of the technical division said however, the policy would have a real positive impact if Fidelity interacts more with the miners.

“If Fidelity and the middlemen will buy at the same price what would attract a small-scale miner to go to the nearest Fidelity buying centre when he can sell to middlemen, who go to the mining areas. It is also important to seek to understand how the miner got those 10 grammes he wants to sell. Has Fidelity supported the miner in any way? Is the miner free to charge a price which is market related,” said Mr Svuure.

He said artisanal miners in the past dealt with middlemen mainly because they sponsor the miners, providing all the resources needed in mining such as explosives and basic equipment on condition that he will buy the gold after processing.

“It will be simply the laws of demand and supply at work. How will you stop me from travelling with my gold to Beitbridge? As long as I am in Zimbabwe you cannot stop me from doing so. So as I reach the border freely then I am almost in the foreign country. So given the corrupt and leaky systems at our borders smugglers can easily form syndicates,” said Mr Mudumbe.

Economist Mr Thomas Masese agreed with the miners and said for the policies to achieve the intended purpose, close monitoring by the central bank is critical.

“In improving gold flows to Fidelity, I think the mechanisms put in place by the central bank will work, especially the decriminalisation of gold possession. However, monitoring mechanisms should still be kept in place to ensure the gold flows to Fidelity. Access to a ready market, provision of finance and equipment, good prices and continued support for the artisan miner which are being put in place are the ingredients for success in gold mining,” said Mr Masese.

Another miner from Mukaradzi, Mount Darwin, Mr Jacob Mudombe said while gold deliveries to FPR may rise this might have a negative impact on the environment because prior to the policy a good number of people have always wanted to deal in gold but have been barred from doing so as it was illegal to be found in possession of the gold.

“It has been double trouble. If you were caught panning then jail awaits, if you are caught in possession of gold then jail again . . . A lot of people really want to deal in gold but the industry is so preventive. I think it would be better to regulate the industry by way of licences and fees which are affordable not the prohibitive ones. Total lifting of restrictions will lead to very serious degradation even if the deliveries will possibly increase,” said Mr Mudombe.

Mr Boniface Mujinga of SMGC Mining, which has mines and gold milling cites in Sanyati and Battlefields, also said the environment may be the biggest loser if measures are not enhanced.

“Government must also introduce control measures because many people will be attracted to the sector,” he said.

Economist Mr Masese said the involuntary shift to gold mining will see improved activity in the sub-sector as the new measures introduced by Government have the effect of making gold mining an attractive alternative.

Gold is a critical sub-sector accounting for an increased share of the total mineral value in 2015 40 percent – compared to 2014 29 percent, according to a State of the Mining Industry Survey commissioned by the Chamber of Mines of Zimbabwe last year.

The survey found that mining output generally declined in 2015 compared to 2014 except for gold which rose 30 percent and platinum one percent and copper which remained flat.

With gold producers planning to increase output in 2016 compared to other sectors with 68 percent of respondents in gold saying they would increase output this year, the targeted 24 tonnes could be easily achieved.

The new measures include increasing access to long-term financing by continuing to source affordable long term external funding for the mining sector. The RBZ is targeting to deploy more resources to the gold sector.

Furthermore, on the mechanisation of the small-scale sector, the bank, through Fidelity Printers and Refiners, is finalising engagements with suppliers of mining equipment targeted at small scale miners. Emphasis is on coming up with appropriate support arrangements.

Mr Tapiwa Kanenga and Mr Innocent Manuere of Moonrise Syndicate in Chakari believe that the country will benefit a lot since many unlicenced miners will shun the black market.

“We started the cynadation plant last year and we are remitting between 400-500 grammes every fortnight. We are aiming to expand,” said Mr Kanenga.

previous
Mining Investment Opportunities in Africa
next
Training handbook for artisanal and small-scale miners in Zimbabwe
× How can ZMF help you?