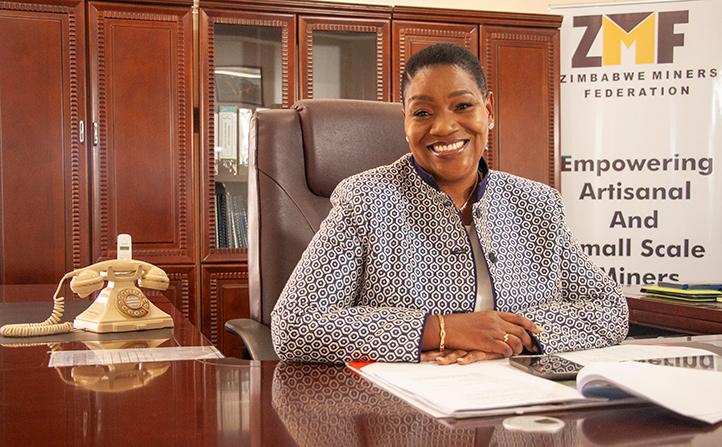 ZIMBABWE’s  total gold output for the first two months of the year spiked by 137 percent for 5130,7 kilograms compared to 2168.3kg in the corresponding period in 2021,official figures show.
According to production figures available by the Fidelity Printers and Refiners, which is the country’s sole gold buyer ,the buoyant small-scale mining sector continues to deliver 1331kg last Month compared to 930,9kg by the primary producers.
Zimbabwe Miners Federation (ZMF) President Ms Henrietta Rushwaya said small scale miners have become dominant players
Players in the mining sector remain optimistic that Zimbabwe will achieve the us$12 billion milestone by 2023 that the government has set.
Ms Rushwaya is on record commending FPR for incentiving the small-scale gold mining industry saying a raft of incentives that have been introduced were attracting players in the sector to improve deliveries in the formal system.
Of late concerns have been raised that Zimbabwe was losing the bulk of the gold through smuggling largely to so South africa and Dubai in the United Arab Emirates.
Rampant leakages are now a thing of the past and as such we are determined towards producing more and achieving the us$12 billion milestone,”
The Government in October 2019, launched the us$12 billion mining industry roadmap from which the gold sub-sector, as one of the country’s major foreign currency earners, is expected to contribute us$4 billion from us$2.7 billon.
Through good retention offered by FPR, the sole gold buyer has now become the hub for the yellow metal collection unlike in the past where the mineral gold was being smuggled.
As Part of incentivising the small-scale mining sector, FPR has come up with a 100 percent forex retention and ZMF has vowed to reciprocate the gesture by delivering the gold to formal market.

previous
ASM contribute over 77% of total gold deliveries to Fidelity in January.....
next
ZMF forms an SPV to run and manage its projects
× How can ZMF help you?